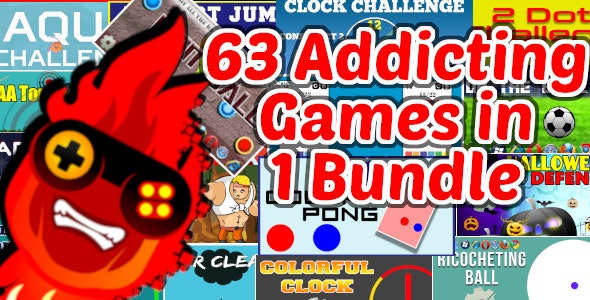 This bundle includes 63 construct 2 Games (Capx) with different subjects and themes that are suitable for a wide variety of players. Here are short descriptions of some of the included products:

Pay attention and be quick to shoot the ball at the right time!

In this flappy game, you control 2 choppers at the same time.

You control two jet fighters in this game, simultaneously! Your jets will shoot automatically and you just have to move them to dodge obstacles and destroy enemies! If either one of your jets is destroyed, you will lose.

Circle around the world for as many times as you can!

Control your space ship in a weird space-time environment and destroy as many enemies as you can!

Jump over the small square and avoid hitting it as long as you can!

A classic pinball game with an interesting twist!

Your aim is to collect boxes that enter the screen.

The clock has started ticking, but are you fast enough?

You are hungry and have to eat all the food that is thrown your way! Just open your mouth and keep eating the foods!

Color all tiles with the same color in 22 moves or less!

You are an alien stuck in a room with other aliens who are trying to kill you! Some of them crawl on the ground toward you and others jump and you must avoid touching them or you will die! But note that survival is not your only goal.

You have to prevent the poor ball from escaping the dungeon.

Another Flappy game! In this game you control a flappy bee and like always (!), you have to tap the screen and avoid obstacles as you move forward. This game is made with Construct 2 engine.

A flappy game with Halloween theme and witches and spiders in it!

Move around the rectangular and travel as much as you can!

Eat circles with lower number than yourself and avoid others for as long as you can!

The circle moves with random speeds and you are stuck on top of it. The only problem is the single obstacle that is on this circle and causes you trouble when it moves, because you will lose when you hit it. So, pay attention to its rotation speed and jump over it to earn score.

You have to prevent the ball from exiting the glass room.

Hardworking bees are gathering honey, but you are a hungry bear and you have to eat something too!

You control an alien spaceship and have to take off from an alien planet! But there are many obstacles on your way and you have to avoid hitting or otherwise you will fall to the ground.