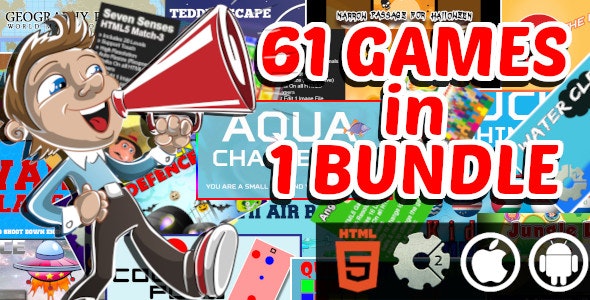 This bundle includes 61 HTML5 games with different subjects and themes that are suitable for a wide variety of players. Here are short descriptions of all included products (7 GameMaker 1.4 and 54 Construct 2 Capx):

Jump on floating platforms and try not to fall in the water!

Flap through obstacles without hitting them and go as far as you can!

Eat as much food as you can and don’t waste any of them!

Jump on platforms and climb the mountain!

A simple yet challenging memory game that put your memory to test!

Jump on the platforms and go as high as you can!

Use your imagination and Build Your Own Robot!

You control an alien spaceship and have to take off from an alien planet!

Like other tourists, you go around the earth and visit new places. But you are different from others!

In this game you can choose from 3 different boys and then use different available faces, hairs, clothes and etc. for making them look like what you want.

You control a plane in World War 2 setting and have to destroy as many enemies as you can.

Another jet fighter game! You control an airplane which shoots automatically.

In this game you control an animal that is falling from the sky with a parachute!

You are an alien stuck in a room with other aliens who are trying to kill you! Some of them crawl on the ground toward you and others jump and you must avoid touching them or you will die!

You control two jet fighters in this game, simultaneously!

Save the Miner is a physics puzzle game. In this game, you must help the miner character of the game to reach the ground by picking boxes that are beneath his feet.

This is an educational matching game. Its goal is to teach the flag of different countries and their names to kids and can be very helpful for them.

Another Flappy game! In this game you control a flappy bee and like always (!), you have to tap the screen and avoid obstacles as you move forward.

A simple Ludo game that can be played on computers or mobile devices! This game supports up to 7 players that can play on a same device.

Angry Soccer – World Cup 2014 is a physics-based game and we tried to add a major advantage to it in comparison with similar games.

An excellent game for kids! In this game, kids can choose from 36 animals and see their cute images and hear their sounds.

“Volleymal” is some kind of sport which was invented by some animals in Africa’s Sahara!

You are a Pumpkin Ninja and your duty is to collect coins and destroy enemies!

In this Match-3 game, you have to become more powerful by matching the tiles with same color.